A simple fox origami that will take five minutes at the most. All you need is a square piece of paper and a little bit of patience. If you’d like to get some nice inexpensive origami paper, I’d recommend this link or something similar. Let’s get started!

Lay your square piece of paper out flat and then fold in half.

Unfold and fold the paper in half in the opposite direction. Then unfold again.

Fold in half along the horizontal crease you have just made. Bring the bottom point to the top. Next take the bottom right corner to the top point. Do the same on the left side, forming a diamond shape.

Turn the paper over and fold in half along the centre vertical crease you previously made.

Rotate the paper 90° clockwise and fold from the right point towards the centre as shown below.

Now separate out the 3 layers of the fold you’ve just made. Take the centre layer and fold in down. This will create the fox’s ears and face.

Fold the left point in towards the centre as shown below to create the tail.

And that’s it! You can fold the bottom of the feet at the front outwards to create more stability if you wish but that’s optional. This is fox is aimed at beginners and children so practice your folds or create this with your kids. For a slightly harder challenge try an origami crane. 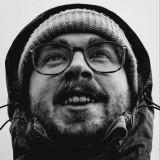